The City of Greeley just recently — with voter approval of Keep Greeley Moving — assumed responsibility for maintaining the more than 700 miles of curb, gutter, and sidewalk in Greeley.

With our new responsibility, City staff are working to catch up on decades damage that took place before voters gave the city ownership of the concrete.

We want to focus on improving pedestrian access and ease of use around high-traffic walking areas.  And we will continue to maintain and improving Greeley’ whole system of sidewalks, curbs, and gutters. Our street overlay program affects the priority of much of our concrete work. In addition to being the most efficient method, it is federally mandated that when the city improves or overlays a road, we must upgrade all our concrete in that area to meet ADA standards. 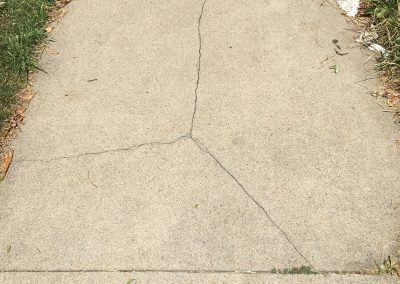 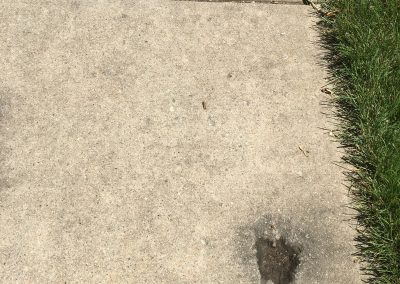 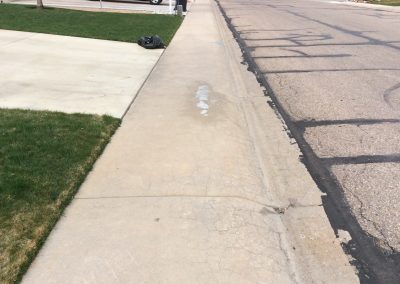 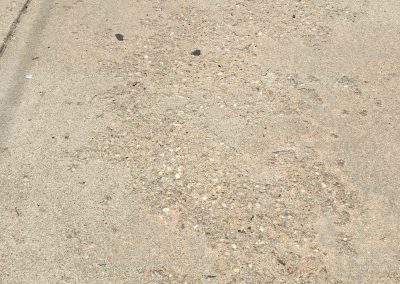 Good
Characteristics of good concrete:
– Superficial damage
– Hairline crack
– Concrete has not begun to separate or move apart
– Broken curb face that does not affect the flow of stormwater 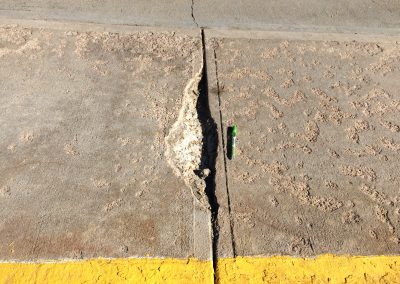 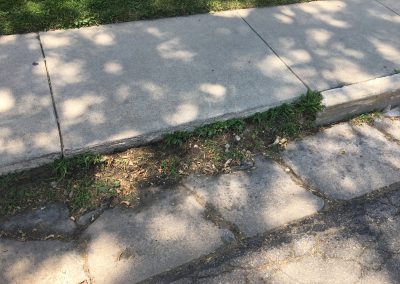 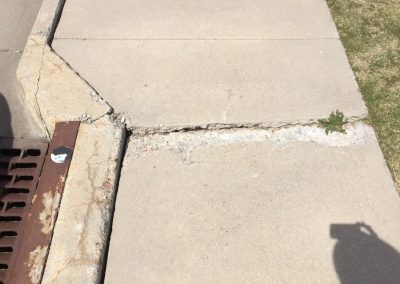 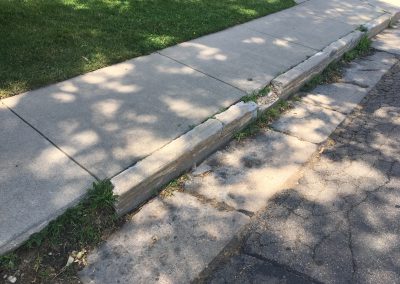 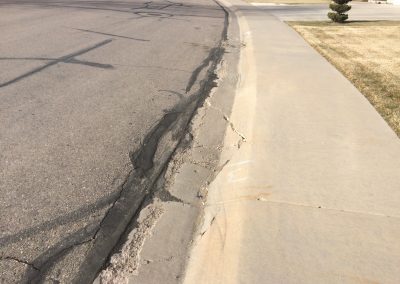 Bad
Characteristics of bad concrete:
– A trip hazard from 0.5 and 2.5 inches
– More than half of a concrete section has crumbled
– Fractured roll-over curbs
­- Crumbling gutters contributing to crumbling asphalt
– Potholes in cross pans 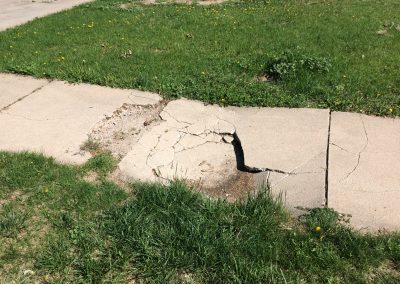 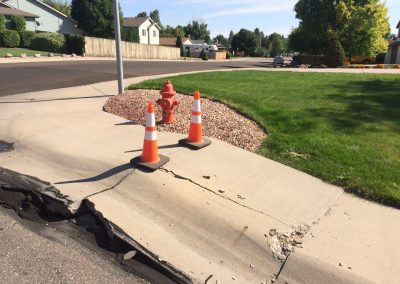 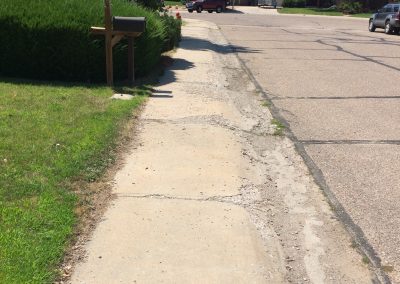 Ugly
Characteristics of ugly concrete:
– A trip hazard greater than 2.5 inches
– A major heave, where the concrete breaks and juts out of the ground
– Severe crumbling gutters contributing to crumbling asphalt
– Large potholes in cross pans

Wan to let us know about concrete damage? Submit a report online.

I received a flyer on my door about concrete work being done in my neighborhood. How will this impact my daily activities?

No-parking signs are placed at least three days in advance in areas where vehicles would interfere with the work. Any vehicles parked alongside these signs on the date of construction may be towed at the owner’s expense.
Large equipment such as backhoes, front-end loaders, dump trucks and concrete trucks will park along the street during the construction process, along with trucks towing trailers with smaller equipment.
Residents will need to park away from the construction zone during some work. Every effort will be made to return traffic and parking conditions to normal as soon as possible.
Traffic control, such as shoulder closures and lane closures may be necessary depending on the location and the work being done. Residents should expect noise, dust, dirt, and debris during construction and avoid areas blocked by traffic cones, barrels, caution tape, or fencing. If you have any questions or concerns, please contact the City of Greeley inspector listed on your notification flyer.

My sprinklers were damaged during construction. Will the City of Greeley pay to get them fixed?

City of Greeley contractors are responsible for repairing any sprinkler heads and lines they damage during concrete construction. The contractor’s crew will usually perform the repairs themselves once the concrete is finished, or the contractor may choose to hire a landscaping company. The City will not reimburse residents if they hire someone on their own to perform repairs or if they conduct the repairs themselves.

Will the City restore my damaged landscaping?

It is necessary to remove a slim portion of grass or another turf during concrete installation. If the portion cannot be replaced upon completion, the City will plant new grass seed in the affected area. Other landscaping materials such as timbers, rocks or bricks will be moved aside when necessary and reinstalled in their previous locations once the concrete work is finished. If you have specific questions or concerns about your landscaping, please contact the City of Greeley inspector listed on your notification flyer, and they will be happy to address issues prior to construction.

When can I walk on new concrete?

You must wait to walk on concrete until it is completely dry, usually about 8 hours after installation.

When can I drive on new concrete?

Wait 7 days and then it should be safe to drive on.
Sometimes a special type of concrete is used at intersections that cannot stay closed so long. That concrete needs about 48 hours before its safe to drive on.
Please do not drive on concrete that is still closed off by traffic cones or barrels. Those will be removed by the contractor when the concrete is ready for vehicle traffic.

My vehicle always scrapes against the bump in the sidewalk when I pull into my driveway. Can the City install new concrete without the bump?

Sidewalks in the City’s right-of-way must comply with the Americans with Disabilities Act and cannot slope more than 2 percent from your driveway to the street. Homeowners can ask the City’s contractor performing the work if they will install an ADA compliant “drive cut” at the homeowner’s expense when the work is taking place. The cost of this modification will vary depending on the size and orientation of your driveway. Please contact the contractor or City inspector listed on your notification flyer if you would like to know more.

Can I write my name in the new concrete?

Unless you have made arrangements with the contractor for extra work in your driveway or elsewhere on your property outside of the City’s right-of-way, writing or defacing the City’s new concrete is considered vandalism and is not permitted.

What’s going to happen to the asphalt pavement that is torn up when the new concrete is installed?

The City’s contractor will temporarily fill voids created by the new construction with asphalt or gravel once the concrete is ready to be opened to vehicle traffic. The City will then have the damage fully repaired with a new asphalt patch at a later date.

There’s some badly damaged concrete near other repairs taking place and it’s been that way for a long time. When is that going to get fixed?

The City strives to repair concrete as efficiently as possible. Because orchestrating concrete work is a lengthy and expensive process, we try to repair as much as possible in the area where work is taking place. These repairs are often constrained by budget and coordination with other construction in the area, such as asphalt overlay or storm sewer repair. Sometimes we will not be able to include other damaged concrete in the project at that time. If there is a specific area you think the City should be aware of, please fill out a request for repair form at https://keepgreeleymoving.com/concrete-maintenance.

As part of the Keep Greeley Moving 0.65% sales tax, the City of Greeley took responsibility for maintaining 700 miles of curb, gutter and sidewalk.

In 2016 the City developed a website enabling residents to register an online request for concrete repair. Along with website requests, residents can call and speak directly with a staff member. Requests began coming in for repairs in December of 2015 and currently the Concrete Maintenance staff has 238 outstanding requests totaling a $1.5 million backlog. In Keep Greeley Moving neighborhoods there is a 27-mile, $10 million backlog of needed concrete work. Staff also began taking a complete inventory of concrete throughout Greeley to determine the city’s overall needs.

In early 2016 Concrete Maintenance staff identified the condition of all ramps in Greeley. Of the 6,319 ramps, 849 or 13.4 percent were ADA compliant. In 2017 that number increased to about 15 percent.

In 2018, concrete maintenance programs will include work in the Downtown, Maplewood, and Rolling Hills neighborhoods. Concrete repair will also occur on streets being overlayed to bring sidewalks and ramps up to ADA compliance. Currently throughout the entire city there are more than 1,500 cross pans with an estimated 35 percent in need of repair.

Additionally, the City will hire a concrete saw cutting contractor in 2018 to remedy minor trip hazards throughout neighborhoods, thus allowing for repairs at about a quarter of the cost of a full replacement. 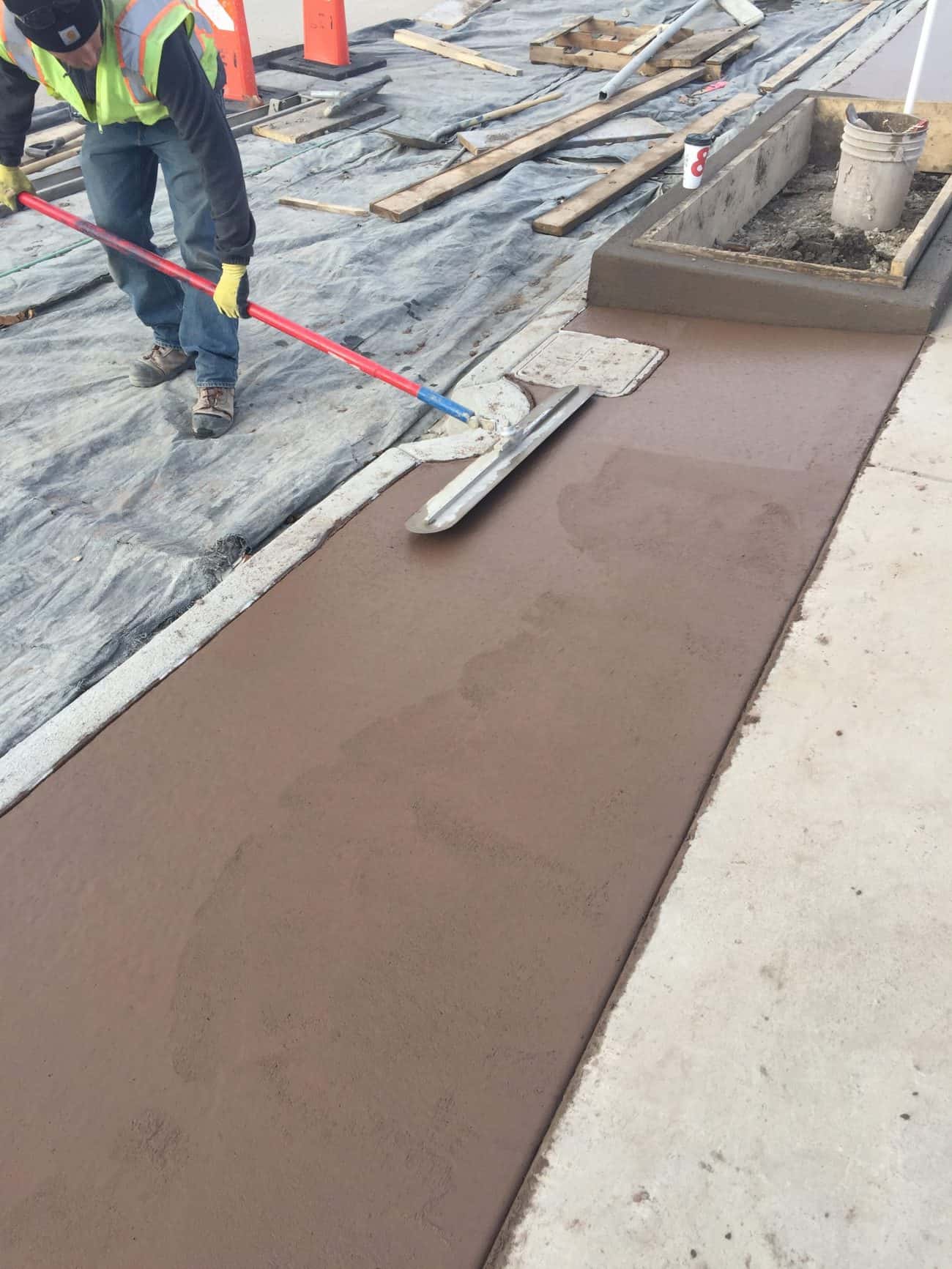 Trip hazards, usually displaced or damaged concrete, can be temporarily repaired by grinding the lifted area. If a sidewalk or apron has too high of a vertical displacement (usually above 1.5 inches), it will be temporarily repaired with a concrete or asphalt patch. After an area is temporarily repaired, it is evaluated and added to the appropriate program for replacement. If you see or know of a hazard, please use the online form below or call (970) 350-9881